274: Boyfriend Brian Wilson out for Season?


In case you live too far from Concord, CA to hear my wailing and gnashing of teeth, it seems that my love Brian Wilson, enigmatic ace closer for the World Series Champions of 2010 San Francisco Giants, is going to have to endure surgery on his elbow, and his season is probably over, mere weeks into what we were all hoping would be a healthy season for our beloved team.

Brian already had Tommy John surgery on his elbow early in his career, and was out for the last part of 2011’s season due to elbow problems. Tommy John surgery, for those slightly less in-the-know about all things Brian and baseball elbows in general, is the replacement of a ligament in the elbow with a tendon from somewhere else on the body. It’s weaved in and out around the ulna. It is named after Tommy John, a leftie pitcher who first had it performed. Pitchers usually need a full year to recovery from surgery, but start throwing about 16 weeks after surgery.

In case you’re wondering how I feel about as Brian Wilson’s girlfriend, adjectives that describe would be “devastated” “heart-broken” “really worried” and also “ready at a moment’s notice to be at Brian’s side to provide comfort.” Brian, of course, says he will still be there to support his team and is characteristically optimistic about the whole thing. Because he’s so freaking cute. I’m sure we’ll see several shots of him in his hoodie, watching and cheering from the dugout, keeping score during the game and supporting his teammates as commentators dish on his latest progress. 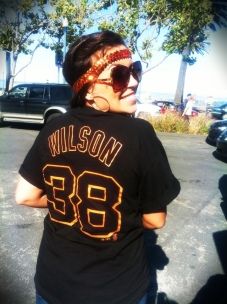 On the other hand, as a dear friend pointed out, if he is out for the season, he will have lots more time to google himself and arrive on my site, contact me, and we can begin the lovely rest of our lives together.

Hey I am excited about everything. I like to sing and dance. I love costumes and clean jokes. And to write.

2 thoughts on “274: Boyfriend Brian Wilson out for Season?”

Hey I am excited about everything. I like to sing and dance. I love costumes and clean jokes. And to write.

Pandemic anxiety, but make it fashion. Life in Lockdown - new blog up. Link in bio or find www.racheldangerw.com
I want to be back here.