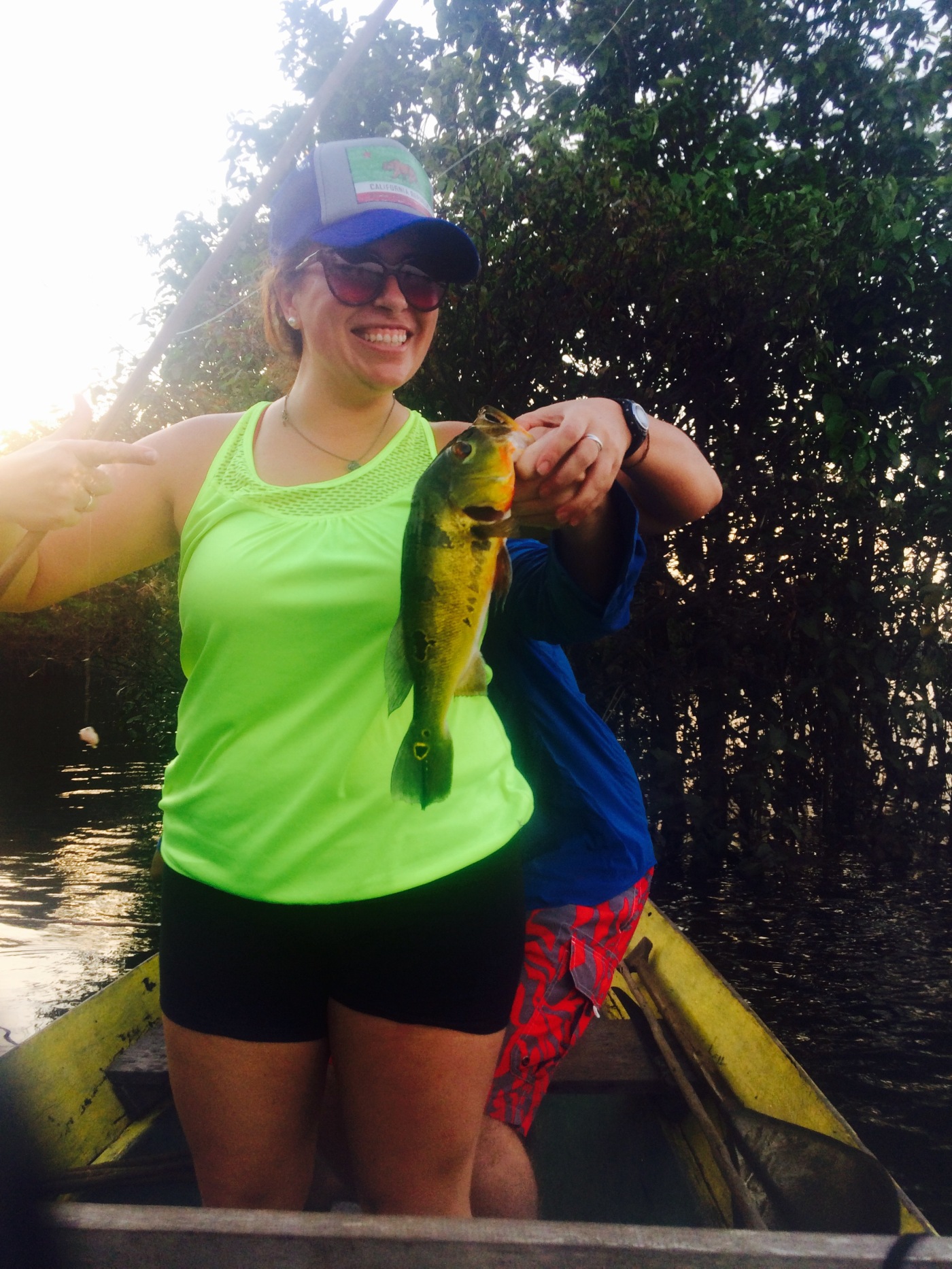 Something that’s really cool about the Amazons is that they have pink dolphins. Yeah. Really. YEAH! Like, if you asked me to think of two things that I love, in the top one hundred (I love a lot of things) you would find the words “pink” and “dolphin” and then you google the Amazon and you realize there are PINK FREAKING DOLPHINS that exist in the world. God is so real.

So we saw them! Many of them! Here’s the thing – they can become domesticated and very exploited and literally pimped out to tourists and it can be very sad. OR you can be staying at a place that is like the Indiana Jones last outpost of civilization, that super respects nature, and roll up in your skiff to a cove and just see them arch gracefully and blindly out of the water every now and then. And not even take pictures, or try to swim with them, just let them live their lives. Yeah. Anyway, pink dolphins are blind! Weird, right? We also chased tons of tiny river dolphins. I don’t know what it is about dolphins, but we just love them, don’t we? We all went nuts spotting them.

The biggest part of Day 4 was visiting a local house. I wanted to visit indigenous Amazon tribal people, but you have to go deep into the jungle to see that. Like, more days and more mosquitos and I was underprepared for that option. But I was glad to see how locals actually lived along the river.

We stopped by for a few hours at a house that harvested manioc. This is turned into farofa, and is a staple of Brazilian food and I am in a serious relationship with it. We saw how they grew the crops, and also açaí, mango, and pineapple, and then how they used super rudimentary tools to grind them into something they could sell to boats that come by. They harvested and treated the roots inside a huge palm frond covering that was home to several kinds of large jumping spiders. So that was neat.

The house was basic – stilts, few mattresses, hammocks (and yes, they make babies in hammocks), mosquito nets, and a fridge only big enough to hold beer and a few essentials. They were made of wooden slats, with no furniture, only some shelves with soccer cleats, and a view of the river. That was actually it. It was wild. There was an outhouse so dirty that I willingly peed outside by a bush while people walked by. The running water had gunk in it. All drinking water was brought in by boat. It floods every season. Bugs everywhere. The air hummed with disease. It was a challenge to be there for just a few hours.

And I love that about traveling – being challenged to reevaluate my perspective on necessities and human rights and what God probably wants for us all. I’ll be honest – I hold back a lot of political or divisive opinions on this blog, because of the range of friends I have that read it, but man…..what a whiny bunch of spoiled children Americans sound like to me and everyone else outside of the United States, complaining about the dumbest things, when there are so many people all over the world who have never even seen a hot shower, or flushing toilet, or electricity that runs all day, or driven a car, or even had the chance to truly learn how to read or write. And they live with no hope of anything better. No hope for them or their children.

My heart beats so fast and my words twist in my head thinking of the kind of ministry and life-saving and goodwill that could be done if we were as passionate about helping other people as we are about sports. Or if we talked as much on social media about how concerned we are about the thousands of worldwide crises that are happening and got up in arms about them as much as we do about a singer’s lyrics, or an offhand comment by a benign celebrity, or someone cutting us on off on the highway…..We take so much so personally, like we’re being physically oppressed and attacked by a song or commercial or what some kid wrote on a coffee cup, but we’re nonchalant and “bummer” and “he was a loner” and “eeek they look darker than me, don’t let them come here!” about school shootings and genocide genocide GENOCIDE happening live on tv in 2016?!

I just put my laptop down and walked around the apartment for a good ten minutes, wondering what people would think of what I just wrote.

Decided if you read and disagree, we can either talk about it, or you can walk it out on your own. I’m gonna stand by it.

Alright. Back to the Amazon.

Our guide, knowing how much I like cemeteries, did a slow drive-by (float by?) of one on the river so I could take some pics. Is this a normal obsession? Please advise.

I got kind of sunsick this day…..it is incredible how the weather affects your drive to do anything. The sun sucks your energy right out of you. I wanted nothing more than to be nearly naked and drinking ice cubes while swinging in a hammock. I can’t imagine getting work, actually physical work or mental work, done in these situations. Wild.

That night we went fishing and had a fish-off, using nets and hooks on lines. Our guide Samir and our driver live on the Amazon, and with nothing more than a hook on the end of a string, could look out on the water, throw a 30 foot line out, and pull in a huge fish in a matter of seconds. It was incredible. These men lived on the Amazon and were used to fishing to support their families and communities. My team won the fish off. Hands down. The other team may disagree, but they aren’t writing this blog, are they?

If you haven’t heard it, and you need to hear it today – I would walk 500 miles, and I would walk 500 more, just to be the girl who walked 1,000 miles to stand outside your door, and hopefully you’d let me in for some pancakes after that, for I’m truly missing them at the moment.

December memory smash. I love how much these help me remember all the many many blessings I do have in my life. It’s a wild ride but a good ride.
November memory smash :) featuring an actual sausage fest, birthdays, Friendsgiving, me remembering how to run, mug cake, candy corn, paintings, new fish, good friends.
October memory smash featuring junks, hot dogs, ms frizzle, actual dogs, some jogs, and lots of blessings I get to call friends.
I just got straight up blessed by a Hong Kong celebrity!
September mems
Fiestas, beaches, teas, staycations, champs, new besties, sand and glitter and paint and sweat and smiles.