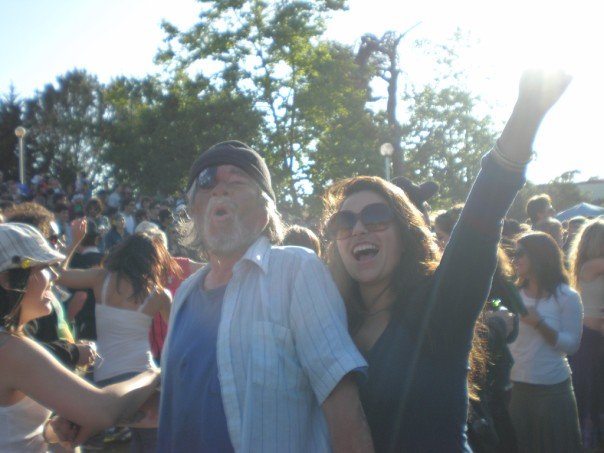 We’re the class of 2006. We witnessed the invention of Facebook, use Myspace and AIM to stalk people, and think the internet is a totally credible source for research papers. We bike to school listening to ipods, text messaging and drinking a Starbucks at the same time. (But if it’s too windy, we’ll stay home.) We all have the same five UCSB sweatshirts and wear them in rotation without washing until we go home in two months to do laundry. We pay 600 dollars a month to share a closet-sized room with two other people, but you can hear the ocean at night and it has a balcony. We go to happy hours at the corner store for bin candy, then Sam’s and Gio’s for pitchers and people watching.

We know that the fourth floor of Davidson has one of the best views on campus. We will see everyone we know when we go there, and get no studying done whatsoever, but go anyway in sweats and Uggs and Nodoze to write that paper we’ve known about for weeks that is due tomorrow morning.

On Tuesdays it’s singing along to “Sweet Child of Mine” at 80s night, Wednesday is karaoking to “Don’t Stop Believing” at OTT, Thursday is the downtown college night and using Bill’s Bus as a dating service. Friday and Saturday are the theme parties, watching Rebelution on the 65 block, Beirut tournaments and trying to remember Thursday. We dance barefoot and paint our faces at Earth Day, celebrating the number one planet and UCSB’s legendary love for our beautiful environment. We rush the soccer field, get hyphy at Extravaganza, fall asleep in the sauna that is IV Theater, catch free shows at Storke plaza, yell at Freshman to go back to FT, and we have all had at least one slightly major, definitely funny bike accident.

We’re not sure why there are eight thousand cops in one square mile of IV, but we know at least three by name, on good or bad terms. We think Halloween deserves a week off school and start thinking of what clever costume we can create in August. We forget what it was by October, and settle for the same fifty dollar vinyl getup 400 other girls are wearing, vowing to take pictures with the Chancellor and his wife when we see them on DP. We’ve had more Top Ramen and Easy Mac than a normal human should, own Woodstock’s number in our phones, and see the same people at Bagel Café in the morning that we saw getting nachos at Freebirds last night.

We’ve signed a petition to make the breakfast burrito the official food of IV, and another to make the Pirate our town mascot. We’ve dropped a class because the midterm was on Halloween or the final at noon on Saturday, or a paper due on our roommate’s 21st, and that’s just not going to fly. Sometimes we catch ourselves using advice from the Wednesday Hump, and a secret dream is to make-out on the top of Storke Tower or in the Library. A major concern is if our house will one day fall off the cliff and mountain side will become ocean side. Our parents think we’re really smart because of all that time we’ve been spending at a place called “The Study Hall.” And where else but here could we have played drinking games to the OC, or with a quarter and an ice tray, or even to the State of the Union address.

And somewhere in the middle of all that, we got our act together long enough to graduate. When we came here four (or five) years ago, this day seemed so far away. We’d been on tracks in high school and gone through a huge process to get into UCSB, and then here we were, living with strangers, getting our bikes stolen, fighting the freshman 15…or 20… We discovered there was a hella big Norcal/Socal rivalry, and developed the ability to form judgements about people based on their area code. Signing up for classes was a complicated nightmare, but how could you not take something titled “Human Sexuality?” Our student fees have risen over 100% since we entered here, our rent is out of control, and in Santa Barbara we find ourselves paying three and a half dollars for a gallon of gas, and 200 for a permit to park in our own apartment complex.

In these last four years we’ve marched by the thousands against the war, knowing it was our generation that is fighting on the lines, and our generation will have to solve this muddled mess. We’ve registered and showed up to vote more than any other university or college in the state. Through classes, professors, and new friends we started hearing something different about our world for maybe the first time ever, forming our own opinions and feelings about politics, education, friendship, love, life, everything. We sent over a hundred students to Berkeley to protest the Regents raising our tuition and cutting Outreach, to Louisiana to help rebuild colleges after Hurricane Katrina, and to march on D.C with congressmen and congresswomen to protest rising student fees.

By our fourth year here, this University has gotten a lot smaller, and we know almost everyone in our classes. We’ve watched a sunrise and a sunset from the cliffs of DP, had a beach bonfire, and taken study breaks to watch the Real World, which we’re considering auditioning for if we can’t find a job right away.

We’ve grown up in so many ways, and we’re ready (we think, we hope) to go out in this great big world and make a difference, help people, bring hope, bring change, strive for social justice and a better world. Our shining, tanned faces are smiling bright with all our ideas and ideals and hopes and dreams. So, the million dollar question…now what?

Whenever I go home to visit family, inevitably talk turns to the future and what my plans are for the rest of my life – or at least what I think they are at that moment. I’m often met with remarks like, “oh, everyone’s so liberal and full of idealism in college. Once you’re out in the ‘real world,’ that will all change.” Or “how will you pay back all those student loans you’ve taken out to have fun for the last four years? What kind of job can you get with these crazy liberal arts majors?” Honestly, I don’t know what kind of job I can get with degrees in Global Studies and Spanish. But the thing is, even if I have to wait tables at the Natural Café for the rest of my life, no matter how hard all the adults tell me “the real world” is, I don’t ever want to lose my idealism. I don’t want to lose my hope. We can’t.

This time in my life…I’ve learned so much. Learned to never lose my bleeding heart, my desire to hug a tree every now and then, the longing to help those in need. I won’t stop marking Earth Day on my calendar. I won’t be afraid to have a job that makes no money, but maybe a big difference. I won’t forget to walk along the beach and watch the sunset. I will put down my cellphone and Starbucks, turn off the ipod, and hold onto my hopes and dreams instead. Our grandparents and parents and the current administration in the White House hasn’t left us with a healthy world. We are in conflict with the environment, cultures, in wars, we’re paranoid, we’re consumers, we’re obese, we’re selfish.

But we can’t lose hope.

I truly believe I’m graduating with the kind of people who have the hearts and minds to turn that all around and give this world something to believe in that’s true. I’ve learned that all here at UCSB, surrounded by brilliant minds and amazing friends, nestled in the most beautiful place on earth. We leave as the class of 2006, taking every bit of this experience with us. Each moment has taught us something we might not even realize yet. I will never forget how wonderful it has been, and I will never be afraid to share my enthusiasm, my knowledge, my ideals, and my love.