The Lost Art of a Road Trip 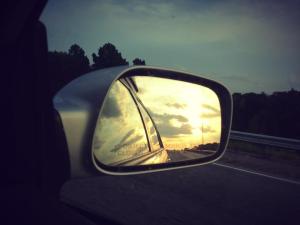 I grew up on road trips – the mini ones like the hour drive to my great grandma’s, the hours up to Clear Lake or Pinecrest, and what seemed like a billion years to Disneyland. Plus, there were volleyball or soccer or swimming tournaments every weekend. This was in the olden days, where we had no cell phones or DVD players to keep anyone occupied. We didn’t even have Sony Discman yet, let alone an ipod for everyone. We only had a radio, cassettes, and each other to occupy ourselves.

But you know what? I feel like those were the glory days. I have so many memories of my mom and aunts teaching us 4-H songs, or my grandma playing music really loud because her car would start dinging obnoxiously over 70mph, so we would start singing The Eagles at the top of our lungs.

We’d practice reciting the states in alphabetical order, or make up games to play with each other. I remember Sophie barfing on my new khaki shorts on the way to Calistoga, and every dip in the road up to Camp Blue. My sisters and I would pretend to be spineless and fall all over each other whenever Dad turned the wheel. We sang the entire canon of “Sound of Music” and made the noise of any animal we passed on the road.

Of course there were fights. “SHE’S TOUCHING ME!” about a thousand times. Glaring at the back of mom’s head when she played Susan Ashton (which I hated for no good reason). I had this weird tic sometimes where I would only let myself blink if we were driving past a tree or telephone pole could fall and hit us in the car as we moved past it.

But I feel like we talked to each other. We had every commercial on the radio memorized. We lost countless french fries in between the seats of my mom’s Dodge Caravan. We looked out for slug bugs and out of state licenses and cars that looked like grandma’s. We freaked out when we saw anyone we knew. We noticed landmarks that indicated we were reaching a destination. We didn’t have a phone telling us where to go, so we got lost and discovered new things, or got mad and hated each other. And then had to ask strangers for directions, like peasants.

Never at any point did we not want to get out of the car once we reached a destination because we had to finish a movie or a game on our phone.

Now you take a road trip with your friends or family and at any given point, one or every one is on their phone. Sometimes even the driver. It’s depressing. We keep talking to each other, sometimes, but mostly about things that we’re looking at on our phones. Go driving at night, look in other cars and notice how people’s faces are all lit up by little screens. Or the kids are watching DVDs…sometimes they each even have their own player. We can’t even watch a movie together in the car (first world problems much?).

Now we never get lost, because we have Googlemaps. No more pouring over a Thomas Bros. mapbook before, during and after a big trip to see oh, the places you’ll go! No more watching your chosen rain drop race the other rain drops down the window, tracing it with your greasy finger – now we get mad when the kids get greasy fingerprints on the iPad screens (at least the road trip snacks haven’t gone away – God bless gas stations and Pringles). We have to yell over the sound of someone’s earphones to get them to answer a question we’re asking (“Hey Drew – are you hungry? Drew! Do you need to eat? Drew! Are you hungry? Do you want something? DREW! DREW! DREW!” *pulls out an earbud* “What?”).

This makes me sad. The beauty of a road trip was the mutual suffering that brought the group together, that we survived in order to get to a place that was greater than ourselves. United by our common pain of being confined in a vehicle with everyone’s musical preferences, but only one radio; with everyone’s smells; with the limited space; with only the whole wide world around us and our own personal stories for entertainment….

I feel like this is getting lost. We should remind ourselves to look outside and notice what we’re driving past. We should start unplugging. The road trip should be about “getting away from it all,” and really meaning it.

2 thoughts on “The Lost Art of a Road Trip”