‘This is brilliant. This is . . . this is either the best idea or the worst idea i have ever had. Either way . . . heaps of fun at the moment. And probably a really good story later.’ — That’s the running inner monologue I had going for the nine days I spent in Japan. And probably 99% of the last four to ten years or so of my life.

I’ve lived in Hong Kong just over two months, but it’s felt longer in many ways. Like every time I’m crying in a government office or a bank. I was excited to get away for holiday – after eight years of teaching my body is on a cycle that requires a vacation every two months or so.

Why Japan? Everywhere else I wanted to go was monsoon season and my current body shape is more layered for a long winter with the Starks and also we’ve apparently made the planet VERY angry and I didn’t want to risk a ticket to my first choice – Bali (good call, turns out, because volcanoes). Japan seemed safe and modern and somewhere I’ve always wanted to go to wander gardens and drink too much tea and karaoke with people just as passionate about karaoke as I am. One night I was feeling particularly sorry for myself and hot damn I bought me a ticket to Kyoto.

I’ve traveled alone before. Exactly a year ago today I was limping through Iguazu Falls and live-blogging a dinner sitting across from everyone’s racist relatives. But I’ve never traveled alone to a country where I didn’t know the language or culture or anyone there. I didn’t really have a plan. I didn’t even have a pla.

Something about Japan has always called to me. When I decided to take the job in Hong Kong, the first flights I fantasized about were to Japan. The dates snuck up on me, and besides extensive pinning on Pinterest of articles and advice I never looked at, I was truly unprepared. The week before leaving I was abnormally socially engaged, leaving very little time for packing, which I’m crap at anyway. I was out late the night before and then had a really early morning flight. There were typhoon warnings and thunder and lightening and I legitimately cried just getting on the plane after a breakfast of ramen and Avril Lavigne playing on the speakers, for some reason.

I made it through the flight. And then the first train. And then standing on a platform trying to read Japanese characters and match them with some screen shots I’d taken. Then a bus I thought might work. Then three more trains before I finally thought “should seek help.” Instead I cried a wee bit more, ate a sandwich from one of many 7-11s to come that made me run frantically to the bathroom, which is a twenty minute adventure of “oh hey what that button do” every single time in Japan, and then got on and off another train and just started walking, thinking to hail a cab. After a few people laughed at me and the backpacks I was carrying, I determined my sense of direction was still downloading, shook off my inner miser and installed the 7 day sim card for Japan I’d purchased and google mapped my way to the hostel.

I’d purposefully booked some quirky hostel situations because carpe diem when in Rome. This one was called Mulan Hostel in Arashiyama, a suburb of Kyoto. It was quiet and quaint, run by a Chinese gal and her Japanese husband, both my age, both sweeter than anything and constantly offering tea. The lad stood on a chair to squash a spider I pointed out on the ceiling and uttered the only English words I heard from him in three days – “I am Spiderman now.” The place had a Nintendo station and slippers to wear inside. I slept in a pod bunk bed and was the only person there that spoke English.

I arrived late and starving, but in suburban Japan, the restaurants typically are for lunchtime, and then you have izakayas for dinner. There is no fast food, unless you want 7-11, which is like the shadow government of Japan. They are EVERYWHERE and control your money, food, drink.

Izakayas are open 6pm – late, and serve beer and food and sake and gossip. There was only one in my neighborhood, tucked in an alley, behind curtains and closed sliding doors, and I’ve never been stared at so hard as when I walked through. There was no menu, but I smiled really really wide and bowed and showed some yen, and got a seat at the bar. For some reason, the three grandmas seated next to me took an interest. We managed to figure out that I was from California, which got the cook singing “welcome to hotel california” and a toast from the grandmas.

They pointed at dishes for me to order, made me take a bite of everything they ordered, and I accepted, too tired to try and explain my allergies. My adopted aunties spoke in rapid Japanese to me, unbothered that I understood nothing, and I just kept shrugging and smiling and saying “arigato” and fingering the Benadryl in my pocket in case of emergency (this would be my move for the rest of the trip). The highlight of the evening came when two of the grandmas got super drunk and started a physical fight with each other that spilled out onto the street. I will never be able to shake that visual from my head.

I slept hard that night in my pod-bunk and woke up to rent a bike and take on my super ambitious plan for the day. It was cloudy but not cold, and I was just so happy to be out of humidity and in long sleeves. I went to the bamboo forest, a romantic Sagano train ride, four temples, some of the most beautiful gardens I have even been to. I almost got hit by several cars. I got blessedly lost in the rice fields and flower fields and scarecrows of Nowhere, Kyoto.

I smiled and cursed at the ache in my legs as I stood up on the cruiser bike to pump the wheels up the hills to some of the more obscure temples with the most interesting histories – women who had been spurned by their lovers and dedicated themselves to studies, only to have the ‘other woman’ join them in service. 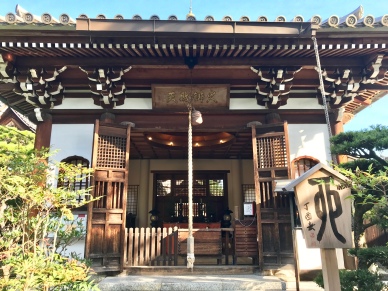 Strange paintings of rabbits and forest creatures on the walls of temples that I learned had been painted to comfort the young priests who had been brought to live there. Dragons on the ceilings to scare away bad spirits and fires and vandals. Fresh water springs still working after thousands of years, with ladles for thirsty travelers to refresh themselves with. Tiny forests and gardens with hidden altars everywhere, sculptures and shrines and well-worn paths to meditation and contemplation and understanding.

Matcha frozen yogurt had never tasted so good. Japanese IPAs had never pleased anyone so much as they did this weary traveler. On shaky legs I pedaled back into the tourist trap town. I managed to get my bike locked into a park station and was rescued by a reeeeally attractive young man.

I wandered the streets in a daze and against better judgement, up the stairs to an owl cafe to participate in some surreality. Owls, man.

That evening I found the riverbanks, the egrets and people watching and drinking wine by myself, stretching my calves and gladly losing count of the trees. There is a custom I wish I’d been brave enough to participate in, where you can go to shops and be dressed and styled in old school Japanese fashion.

Probably 50% of the Japanese people out had done this and were dressed in traditional clothing and taking super insta-worthy photo shoots. It was enough for me to watch them pose and then cuddle up on the banks of the river to choose the best filters and hashtags before posting.

At every place I went, I was struck by just how old and seeped in ritual and tradition Japan is.

The rocks, the moss, the paths, the writings and everything I was seeing was ancient. The monks chanting, the incense burning, the rituals observed, every tiny altar everywhere seemed to embody a kind of gravitas I hadn’t really experienced before. At one of the last gardens I’d visited, I’d realized I was trying to jam through, to take every picture I thought might look cool later, to hit everything marked on the map. But I had a moment where I realized that was the opposite of what the people who had built those gardens and temples would have wanted. The paths wandered and twisted to force you to slow you down into contemplation. If I sped my way from one Tripadvisor recommendation to another, I’d completely miss the point.

I couldn’t possibly understand the religious context the places were created in, but I could certainly understand the eternal need to slow down and appreciate any moment or idea or bit of nature that crossed my path.

After that, I gave myself permission to go slow and to rest. To listen to my body and soul over my mind and my bank statements that said “you’ve paid xxxx to be here – see EVERYTHING and experience it ALL or it doesn’t count!” Because that’s just patently untrue. To go somewhere and to be there and meet everyone that crosses my path with a smile is enough.

And that’s most of what Japan taught me on days one and two. Stay tuned.

If you haven’t heard it yet today and you need to – taking shoes off before you enter a house is really the way to go. Things are much easier to clean that way.

Hug each other and then an extra one for me. I miss hugs.

Adventure is Out There, Asia, ex-pat, life, living the dream, Rachel in HK, teaching abroad, travel

My Novemberies giving me all the feels - so much to be thankful for - Sixth year in Hong Kong, amazing friends, FaceTimes with family, a job I (mostly) love and am usually amused by, hiking, volleyball, getting sick but then well again, the circus coming to school, rugby beginning to make sense, the return of live music, and an international circle of friends who will indulge their token American and let her celebrate thanksgiving and make up rules about games and be the “organized fun” dictator for the evening. It’s a good life.
Friendsgiving 22 💕
Oktober memory smash, featuring two bierfests, Thailand, the opening of pumpkin bread season, spiders, staff party, trying chicken feet, running and hiking and brewing, oh my! Books, beaches, air con repair. It’s a good month.
Hiking Hong Kong trail sections 1-4! Gorgeous day for it. Many thanks to M&S sausage rolls, Hersheys Kisses, and coffee for this journey.
You may forward all mail here. Please and thank you.
Oktoberfest Fest with the gang🍻