Soup for you! …maybe… 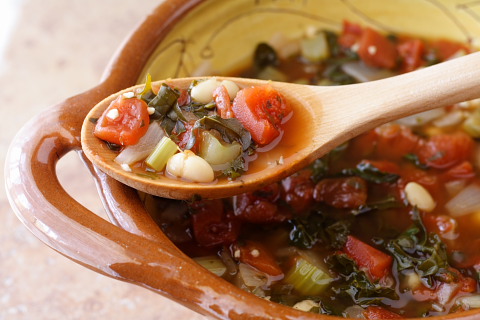 Wandering through the florescent bright aisles of Safeway, wondering which can of tomatoes to get (stewed? diced? seasoned? unseasoned? mexican seasoned? italian seasoned? petite? what the what?!) and trying to decide between turkey and ground beef, 1 percent milk or 2 or nonfat, which kind of coffeemate I wanted the most, I remembered why I eat so much Easy Mac.

I’m not sure where I got the notion….too many readings of Laura Ingalls’ Wilder books as a

child, or too many current viewings of my Dr. Quinn, Medicine Woman dvds (I’m obsessed!), but I somehow thought that making my own soup recipe from scratch would be incredibly cool and organic, almost a romantic date with myself in a way. And like some sort of wife/mother to be training. Getting in touch with my pioneer roots.

When I was in college, every once in a while I would get it in my head that I wanted to cook something real, something from scratch, like roasted chicken or raviolis or a whole ham for Easter one year. And I would go to Safeway and spend hours trying to figure it all out, and end up calling my grandma and asking things like  “what aisle do you think they keep bacon bits on?” and coming home with six heads of cabbage instead of lettuce, because I honestly didn’t know the difference.

I’ve come a long way since then. But as a single person with a really time-consuming job, I don’t put a whole lot of effort into what I eat. I’m lucky to eat salad once a week, and Mike and Ikes are a fruit group for me. Tonight it took me an hour to pick out 18 (18!) items that I thought I needed for soup. I boldly decided to get some peeled organic baby carrots to put in. This is a bold decision because I am allergic to carrots. But I want to wean myself back onto them, like some sort of toddler.

Then I get up to the cash register, and there he was. My Safeway Crush. Jacob. This man has a voice that would make a wolverin

e purr. I first heard it when he came on the intercom at Safeway and asked for a price check or a clean up on aisle seven or something….I literally stopped in my tracks in the produce section and looked up towards the heavens. It was the voice of an angel. A man angel working the check out at the Clayton Rd. Safeway. A “mangel.”

I was in my post-work out glory (sweats, sweaty hair, sweaty face, reeeeeally old sweatshirt, Shape-ups. Sigh) and I had a cart with: ground turkey, potatoes, squash, zuchinni, onions, peppers, Coffeemate, cottage cheese, tomatoes, and, of course, tampons.

Everything happens to me!!!!

I wanted to hear him speak so bad. But everything I said, he deflected with a nod of his head. I choose to interpret this as “I am also secretly attracted to you, and so I am too nervous to speak to you with my amazing voice of seduction.” I’m actually nervous that in some horrible act of fate, he saw my profile on Yelp, where I mention that my current crush is…him!!! ahhhh!!!

So, rejected by my mangel cashier, I went home to my soup making.

Four hours after I left my house, I am watching a pot work itself up to a boil. I have fished two suicidal potatoes out of the garbage disposal, where they took a dive to avoid being peeled. I have sliced my fingers cutting squash. I have cried over onions. I have eaten one baby carrot and my throat started to close up. Two days in, I gave up my “no wine on weekdays” resolution and decided that one cooks better with vino. I still don’t know what recipe I’m not following. My hands smell like garlic. I have found nothing romantic about making dinner. I am so, SO thankful I was not a pioneer woman, as my wagon of oxen and children would have starved right after we left the homestead for the wild west.

But my throat stopped swelling. The wine I bought last week is still good. My house smells delicious. We should invent a candle flavor called “homemade soup.” Mmmm fantastic.

being single, boys, food, growing older., life, what the what